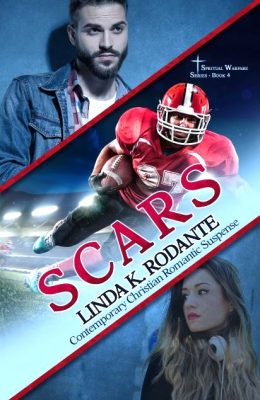 He tried to leave the past behind, but it won’t leave him…

Ex-gang member Garrett Lovett is a new creature in Christ. At least, he’s trying to be. He’s got a wholesome routine, a place on the IronWorks football team, and a pretty woman he wants to know better. But when the old gang resurfaces with the ultimatum to re-up or face consequences, Garrett has tough decisions to make. These guys know how to get to him—his addictions, his fears. When things get life-threatening, Garrett must decide if this God he’s heard about is real or not.

And if so, can he rescue Garrett and those he loves before it’s too late?

They rode in silence for a while and finally pulled into Howard Park. A short distance
across the causeway, he parked on the far side near the water. Evening was dropping fast.
Seagulls called, the wind blew cool and damp, and sea-salt smells filled the air.
After kicking off their shoes, they headed across the sun-warmed sand. When they hit the
hard sand along the water’s edge, she turned and headed up the beach at a fast clip. Garrett
hesitated a moment then met her stride.
They circled the small island, passing a few other late comers. He wondered if a park
service employee would run them off soon. The park closed at dark, and dark was almost on
them.
Ryann stopped abruptly and glared at the dark waters. So, did she want to talk anymore,
or should he leave it?
A half-moon rose over their shoulders competing with the setting sun. The wash of
tangerine, blue and sapphire would be gone soon fading into night. Shallow waves rushed and
withdrew, their hush-hush sound background music to his thoughts.
He cleared his throat. “I keep hearing about this forgiveness stuff.”
“Yeah, me too. Only if you forgive, that doesn’t change the other person.”
Ah. There was someone she felt should change. His dad kept acting like Garrett should
change, and Garrett was sure his dad should. “What if they don’t feel they need to change?”
Her laugh sounded like a bark. “That’s the thing. They don’t feel they have to. So why
should I forgive?”
He was sure she should, but she was getting out of his league now. Pastor Alan or Reece
could help with that question. “You should ask someone who knows this stuff.”
Ryann shook her head. The wind tossed her hair across her face, brushing her lips. He
swallowed, stared over her head at the Gulf waters.
“Maybe?”
She huffed. “Maybe.”
“Someone important hurt you. Let you down. They tell me that’s the stuff you gotta deal
with.”
She huffed again.
“That guy you were facing off with at the church? He’s one of those that hurt you, right?”
“Matt? Maybe.”
“Lot of maybes here.” He tilted his head, wondering if he should pry anymore. “Come
on. Let’s walk.”
She turned, sent him a long look from under her lashes. “You do this often?”
“Walk at the beach? Just started since joining IronWorks. Some of the guys there come
out regularly. I like it. Seems the wind blows dust from my mind.”
“Why did you join the gang?”
He said nothing, but watched the wind catch her hair, twirl it. Behind her, across the
waters, the sky had turned dark violet. Warmth stirred in him that had nothing to do with

physical desire, but everything to do with the pleasure he felt being with her, that she’d wanted
to come, that she’d shared something of herself with him. It made her question not so intrusive,
and he gave her the condensed version about his mom dying and his father’s descent into
alcoholism and abuse.
She stopped. “I’m sorry about that.”
He could feel her concern. “Yeah, me too.”
“How are you and your dad now?”
“Still a long way from where it should be.”
Her chin dipped as if acknowledging that, and she started walking again. He caught up in
two steps. Moonlight shimmered on the waves now. The rush and crash from their interplay
creating a hypnotic effect.
Ryann wandered near the water, kicked spray into the air. A hundred lights caught the
moon’s glow and winked at them—a counterpoint to her frustration.
He drew close, making sure she could hear him over the wind and waves. “So, Matt?”
She glanced his way but didn’t answer.
Okay then…
He lifted a hand to her cheek. The moonlight glinted on her hair, across her nose. Her lips
pulled in, and he felt her studying him, felt her hesitation. He slipped his hand down her jaw,
under her hair, to the back of her neck.
How long had it been since he’d wanted to kiss a woman, nothing more on his mind?
Since he was fourteen? Sixteen? In the gang, women were objects. To be used. Yet right now all
he wanted was to continue this closeness that had suddenly developed between them, to get to
know her.
He pulled her gently forward, his gaze searching hers. Lowering his head, turning it, he
pressed his mouth against hers, feeling its softness. She didn’t pull away. He dropped his hand
down her back, let his arm draw her close, felt the length of her against him.

SCARS by Linda K. Rodante is book four in the Spiritual Warfare series. While this book does stand alone, it takes over where book three ends with the same characters, so it is best to read them in order. This series focuses on a ministry within  a church that helps ex-convicts and ex-gang members get back on their feet. This story focuses on Ryann, who teaches climbing when not volunteering with the ministry, and Garrett, a former gang member. Garrett has been given a second chance and has chosen to follow God and Ryann is still struggling with issues regarding her past and her faith.

This is an enjoyable story to read. It is well written with a variety of characters, mostly good. The story does touch on the results of gang activities and premarital sex. I enjoyed catching up with past characters and seeing what has happened in their lives. It is heart-warming to see the care the members have for others. While the pastor and his wife have responsibilities at home, they travel to help family affected by a hurricane. When they develop health issues, the people from the ministry are there to help and pray for them. The message in this story for me is that the church is there to help those in need, regardless of their situation, they do not need to get their lives in order before attending the ministry and they are not looked down on.

I voluntarily received a complimentary copy of this book through the JustRead Publicity Tour program, this is my honest review.

Linda K. Rodante is a Florida transplant now living in Tennessee. She loves sweet tea, apple butter and both the mountains and the oceans. Her work with crisis pregnancy centers and anti-trafficking groups gave her a heart for women struggling in today’s society, while still respecting the role God has given men.

She writes Christian romantic suspense novels. Her books wrap sweet romance in real-life issues women face today with an edge of mystery and suspense. She desires to entertain and encourage women in their walk with the Lord. Her books can be found on Amazon

She’s a past finalist of ACFW’s Genesis contest and a member of Word Weavers International.

Connect with Linda by visiting lindarodante.wordpress.com to follow her on social media or subscribe to email newsletter updates.

Full tour schedule linked below. The giveaway begins at midnight October 26, 2022 and will last through 11:59 PM EST on November 2, 2022. Winner will be notified within 2 weeks of close of the giveaway and given 48 hours to respond or risk forfeiture of prize. US only. Void where prohibited by law or logistics.

Giveaway is subject to the policies found here.